The prospect of moving off the grid and running a home on solar power is often exciting and intriguing, but what is the reality? How well does a solar powered home really work in the dark winter months?

We finally moved into our off grid home just a few days shy of the winter solstice. Not only have we had the shortest days of the year, we’ve had some of the coldest too.

While I would have loved to move in back in June or July with long sunny days, I’m actually glad we’re getting to “cut our teeth” with off grid living on these short, dark days.

Learning how to use what we have while it’s scarce means we’ll always have enough. It also means we’ll be able to plan even better for next year.

Here’s how solar power is really working for us in the winter.

Off Grid Solar In The Winter: Our Experiences With a Small System

Solar Components in an Off Grid System

How much energy are we using?

What uses the most electricity, what doesn’t, and what’s missing?

What do we do differently off grid to save energy in the winter?

To help you understand how off-grid solar works for us in the winter, you need to understand certain electrical terms. If you are an electrical newbie like I was, here is an easy way to define the words I’ll use most often:

Watts – A unit of measure for indicating the electrical power applied in a circuit (i.e. your hairdryer might use 1875 watts, old lightbulbs might have used 60 watts but their newer LED versions only use 8 watts, etc.)

Amp Hours (aH) – A unit of measure for battery capacity (i.e. your smartphone might have a 5000 milliamp hour, or mAh battery life, which is 5 amp hours, or aH)

Volts – A unit of electrical pressure which makes current flow in a circuit (i.e. your car battery might be 12 volts, or you might use 9 volt batteries in small electronics throughout your home)

Solar Components in an Off Grid System

We purchased our components from Mr. Solar and are fairly pleased with the service we received from them. Our main components are: 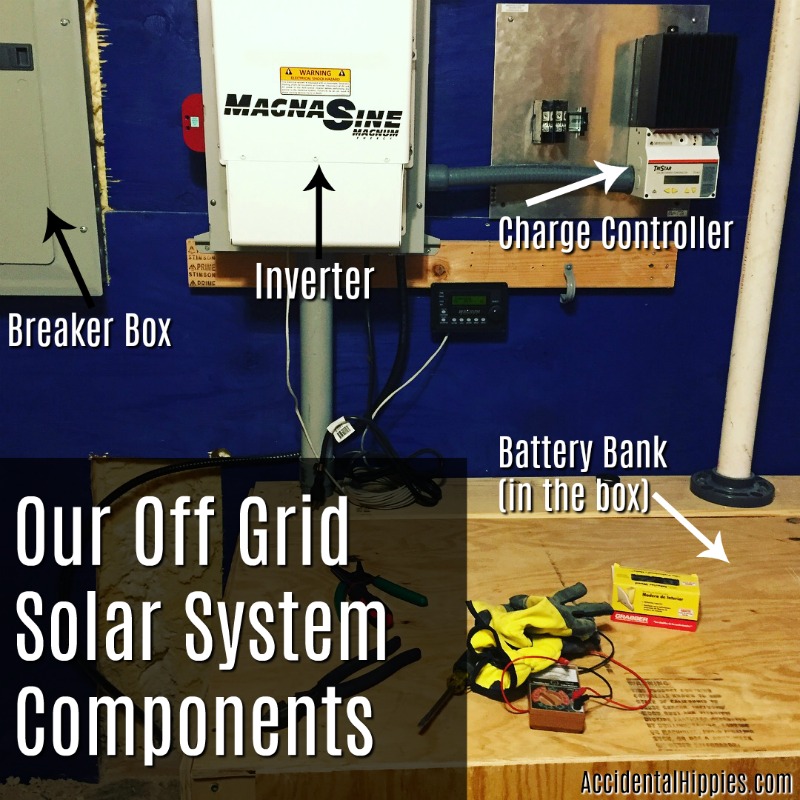 If you need a primer on how to get started with solar, you can read more here.

About Our Climate and Latitude

Any info you read about solar energy should always be taken with a grain of salt. Everyone’s latitude, terrain, and weather patterns are different and all have an impact on the performance of off grid solar power.

We live in Kentucky, north of the 38th parallel. Our house sits on the top of a hill with a wide open view of the southern sky.

I found a nifty site called SunCurves that will take your exact location and give you information about the sun relative to your terrain and other variables. I just looked at the free version though you can change the date in the paid analysis. After I dragged the marker over our house on the map it gave me this info:

Our weather is a healthy mix of sun and clouds. We have had week-long stretches of sunny weather this winter, but other weeks of straight clouds and snow/rain.

Our temperatures and weather patterns are widely varied, which has a significant impact on how much we run certain systems and how much energy gets consumed. As an example, this is the forecast for the week in which I’m writing this post (all shown in Fahrenheit): 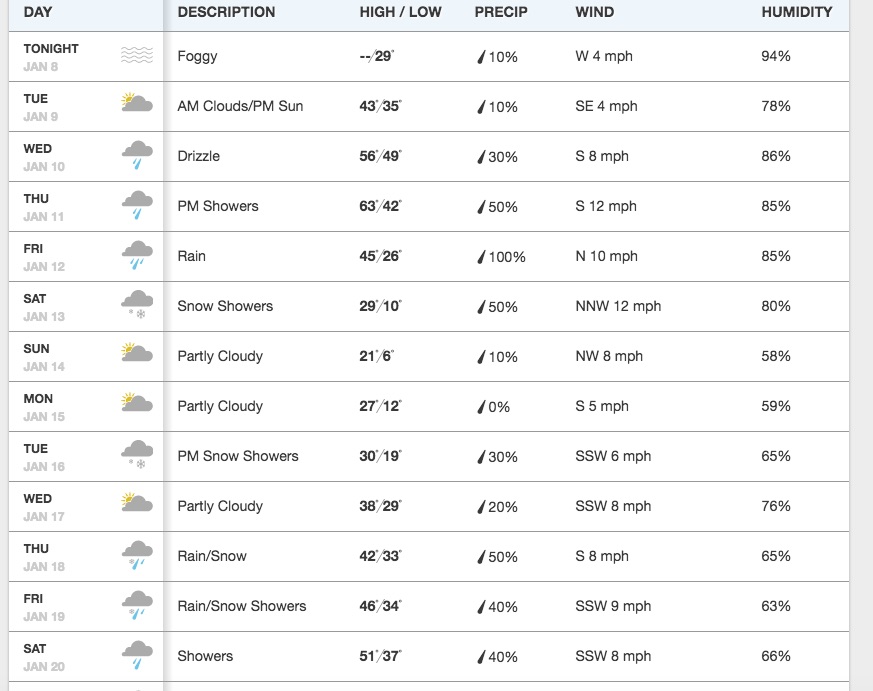 Last week was entirely in the -5 to 15 degree range, so who knows what we’ll get next. Winter is a grab bag here.

How Much Energy Are We Using?

First, there is no meter that says what percentage battery life you have left like you do on your phone or laptop. Instead, you have to go off of what the voltage readout is on the charge controller or inverter remote (the later of which we purchased separately).

Nominally the battery bank is 24 volts.

When it’s charging on a very sunny day it’ll read out between 27-28 volts. Once the sun goes down it’ll settle right around 25.6 volts if it’s full or close to it. Most winter days we’ll settle around 24-24.5.

We have it set to cut the power automatically (to avoid damaging the batteries) at 21 volts.

Depending on what we’re running, we seem to use about 1.5-2 volts per day, meaning that without a sunny day to charge up the system we get about 2-3 days of reserve power from the battery bank.

Yesterday was entirely cloudy with no breaks for sunshine. We generated a max of 25-50 watts from the panels at any given time throughout the day and seemed to basically stay at the same voltage all day long.

For comparison’s sake, on a bright sunny day we’ll easily generate 1100+ watts for hours at a time, even in the winter.

What Uses The Most Electricity In Our Off Grid Home (In the Winter)?

We have quite a few things in our home that consume electricity either continuously or intermittently. The biggest draws during the winter include:

Ours technically runs on propane, but the pumps require electricity to circulate water through the system. Additionally, the tankless on-demand water heater requires a certain amount of electricity to function, and both constantly pull a small load on standby (roughly 6 watts). When running they consume between 200-500 watts in total.

Cistern Pump: 2000+ starting watts, +/-1000 running (10-15 seconds an average of 15 times a day): To get water from the cistern into a pressure tank for household usage we have this inexpensive shallow well pump like the kind you can get at most big box stores. While this kind of pump is cheap to buy and relatively easy to install, it uses a LOT of energy and is a little noisy.

The pump runs any time the pressure tank gets below a certain PSI, which happens after we’ve used a certain amount of water for things like washing dishes, laundry, bathing, and so on. It typically runs between 15-20 times a day for roughly 10-15 seconds each time, depending on what we’re doing.

Desktop computer: 125 watts: We have an iMac that Mark bought way back before we knew we would be living off grid. Plugging it into the Kill-a-Watt showed us it uses about 125 watts to run, which isn’t HUGE but it’s a good drain if you leave it on all day. I avoid it in favor of using our Macbook Pro’s which only pull about 20 watts to charge.

What doesn’t use tons of energy?

There are certain things I don’t worry about at all, like phones, radios, or our wifi hotspot. They all generally pull about 1-5 watts and barely make a dent in our usage.

I don’t generally worry about lights either because we don’t ever leave them on for more than a few minutes. We built our house to bring in tons of light from the outside, so even on cloudy days it’s typically not necessary to have them on. Lights would be a bigger concern if we needed to run them all the time.

What DON’T we have?

An electric refrigerator, for starters! We actually had a little mini fridge that drew about 65 watts, but on these days when the radiant heat is cycling on and off we just didn’t want to waste the energy to run the fridge.

For a while, we’d been freezing ice packs and jugs of water outside and then putting them in the coolers.

UPDATE NOVEMBER 2018: We eventually saved up and bought a propane refrigerator. Living with one has been quite a bit different than living with a standard fridge, but overall we like it very much! It doesn’t draw any power since it is propane only with a little battery to run the LED light inside.

UPDATE 2021: We expanded our solar power system by nearly triple in 2020. This has helped ease some of our wintertime burden but many of our initial observations are still true. You can read more about that here:

We also don’t have a dryer! We’ve been air drying our clothes on drying racks in front of the wood stove instead. It’s free and it adds moisture to the dry winter air, so it’s a win for everyone! The little Ecofan we have sitting on the wood stove is also a pretty big help for keeping our consumption down and is well worth the price!

I also don’t use a hairdryer or other heat tools as much in the winter. At least, I don’t use them if I can avoid it. A flat iron actually doesn’t use a ton of energy for what it is (about 200 watts for the 10 minutes I use it). During the summer, I never really have to think about it, but make concessions in the winter if it’s needed.

What do we do differently off the grid to save energy in the winter?

When we know that it’s going to be cloudy for a while, we’ll plan our usage around that and avoid doing things that use tons of energy like running the washing machine or taking super long showers.

When the sun comes back out we like to let the battery bank get a good amount of charge back in it before we start doing energy-intensive activities, like using the washing machine, vacuum, or power tools.

Besides, it’s easy enough to accomplish those tasks with little to no power by:

For an example on saving water and the power to run the water pump, we started keeping a jug of filtered water on the bathroom counter.

When we have to brush our teeth, we pour a little water into our cup and dip the brush in to wet it. Brush as usual (no water running), give the brush a quick rinse, and rinse/spit with the water from the cup.

It takes our little family of three almost two weeks to go through one gallon of water for toothbrushing. Compare that to the 5 gallons you waste by leaving the water on every time you brush!

Look at other things you do, like washing your dishes or showering. How could you change your habits to use less water and power?

Off-grid solar IS possible in the winter.

You just have to be smart about your consumption, especially if you have a smaller system like we do.

If you’re just getting started with solar, read our primer here.

And if you’re wondering how much power you might really need, continue reading here.

Wondering more? Check out our homestead progress updates and find out more about our cordwood homestead project here. You should also join us on Facebook, Twitter, and Instagram. I’m always pinning lots of great ideas on Pinterest too! Thanks for reading! 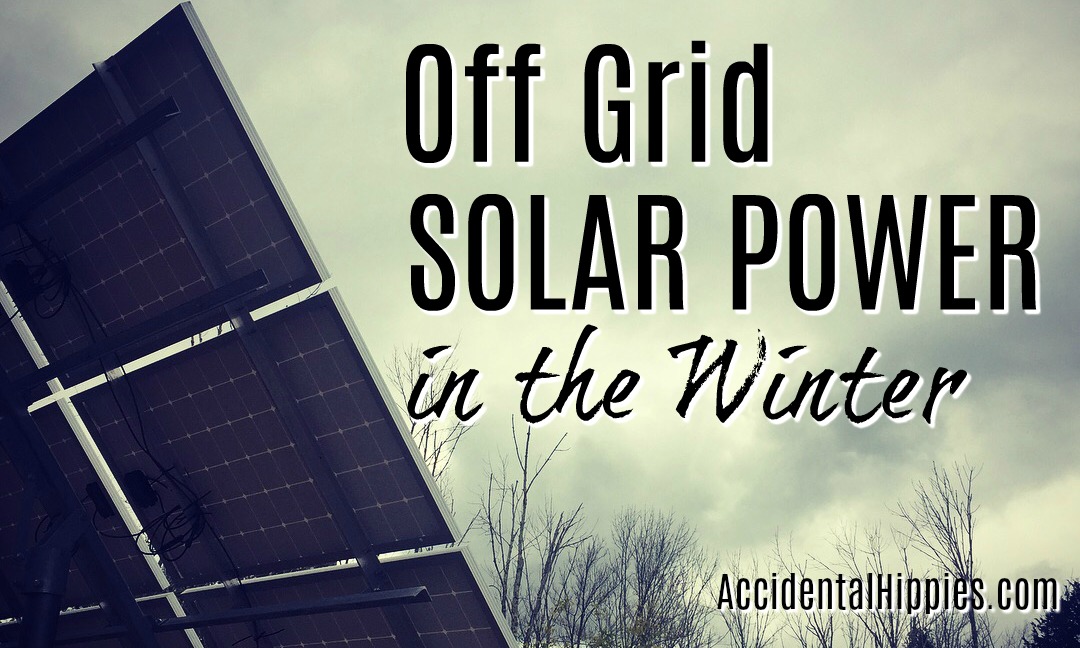