Looking at installing your own off-grid solar power system? It’s exciting, but it’s hard to know where to start, especially on a small budget. In this post, I’ll show you how we created our original off-grid power system, how we expanded it, and the lessons you can learn from our mistakes.

That was the cost our local power company quoted us for the privilege of running power lines (and then paying a monthly bill) to our peaceful, idyllic homestead property.

We love that our property can’t be seen from the road, but its distance from the nearest power hookup meant we needed to figure out how to create our own off-grid power. So we did! And for a fraction of what the cost of power lines would be.

We started out with a fairly small solar power system and thrived for several years. But we knew we wanted to expand our capabilities, so we got to work.

If your goal is to install solar power and even live off the grid I’m going to show you how we managed on a small solar system and how we created a bigger, more robust off-grid solar power system for our little house far from the road. 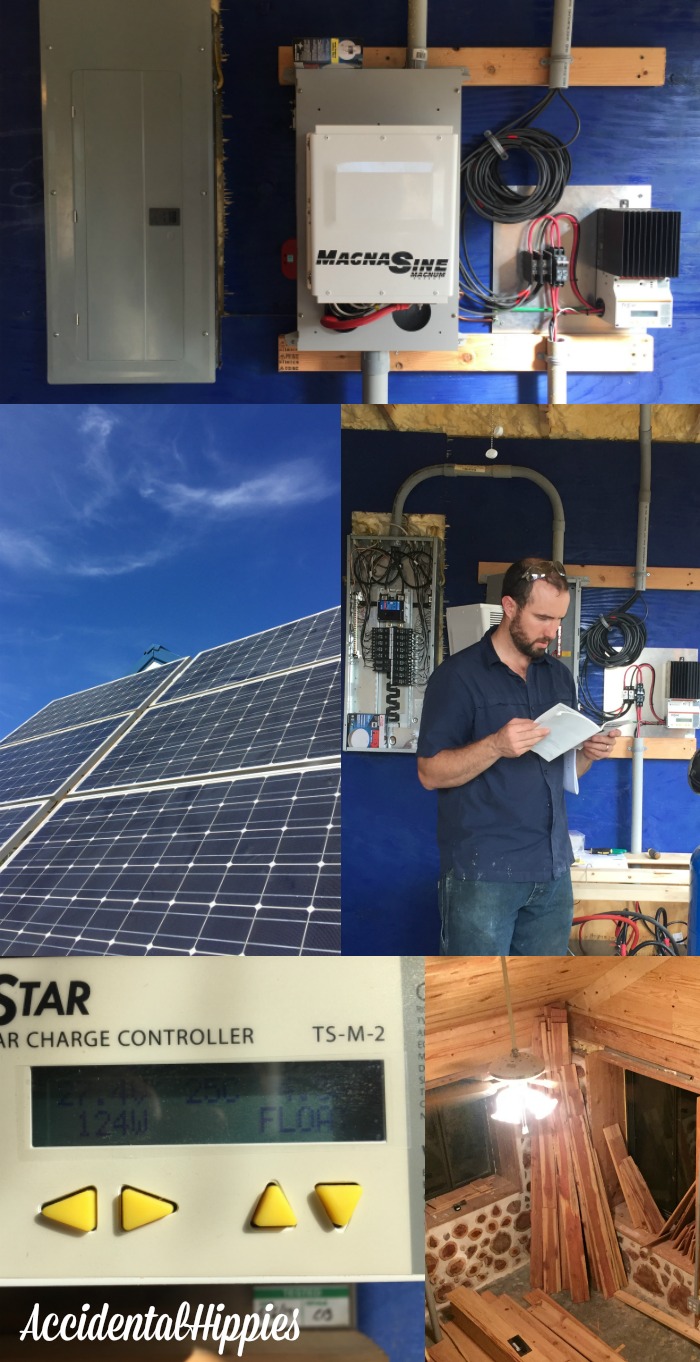 The original version of our solar power system came from a company called Mr. Solar. Overall, our experience with them was pretty positive. They had someone help us through the design of our system based on the specs we gave them.

We originally found them by doing internet searches like “off-grid home power systems”. Many different companies offer packages already bundled for sale. In fact, our original system was based on whatever version of this bundle they had at the time. We used that bundle as a starting point when we began designing our system with one of their reps

Why We Decided to Upgrade

We had been getting by with our 1.14 kW system from 2017-2020 relatively well. We could actually run quite a lot with it! But a system that small posed some drawbacks:

Air conditioning might sound like a frivolous luxury to some folks. But in reality, lack of A/C in hot environments can be a serious health hazard. And while the thermal mass and passive solar of our cordwood house help keep it naturally cooler than most homes, that can only get you so far.

We wanted to be able to run A/C for a few reasons. Chiefly, to create a more hospitable environment for when we have summer visitors, especially our parents. But also, we ourselves wanted to be more comfortable (or to at least take the edge off)! Living off the grid doesn’t have to be miserable!

Related: What Does it Actually Mean to Live “Off the Grid”??

So to accommodate all of that, here’s what we did: 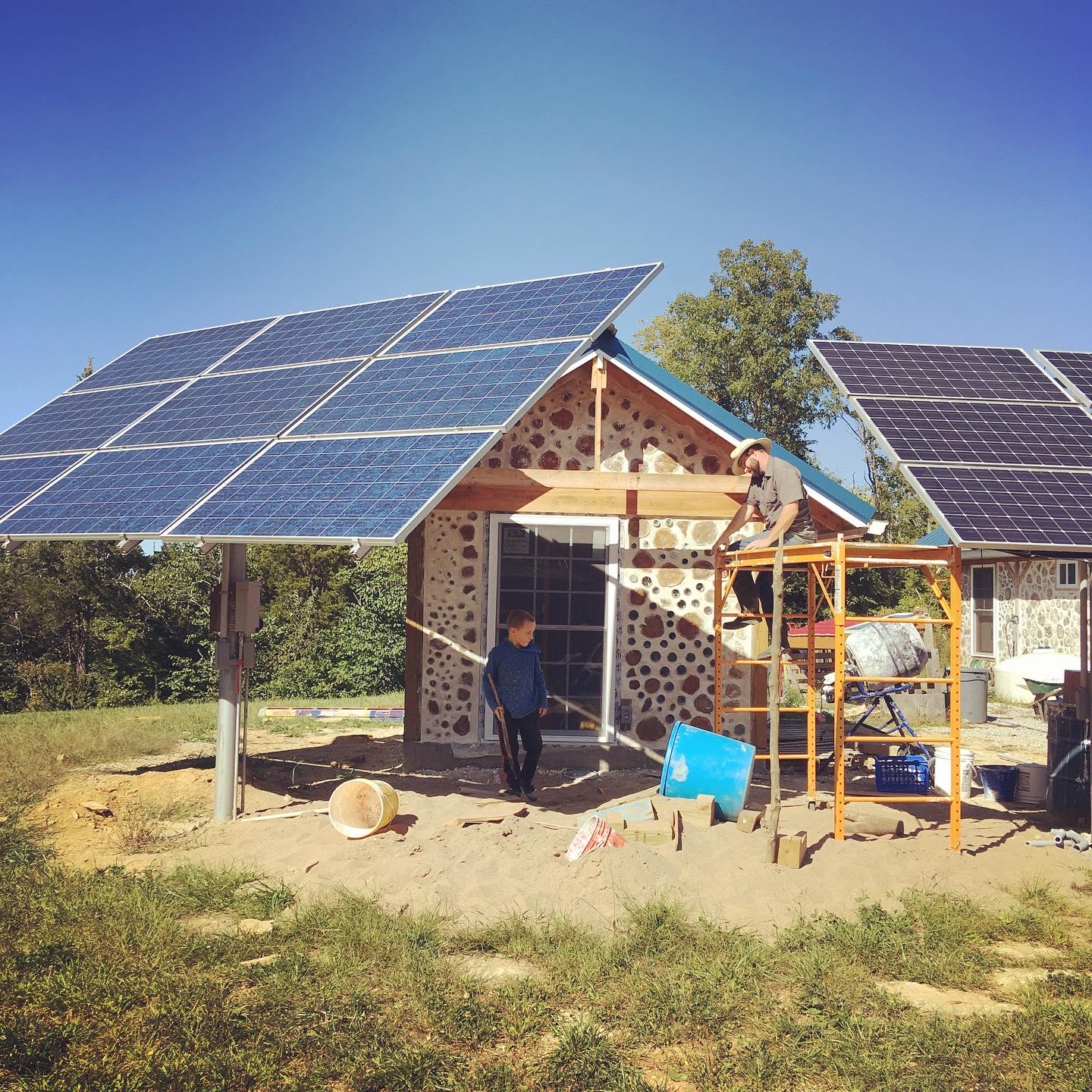 The story of this expansion begins with the good folks on this blog’s email list. I casually mentioned when I published this post that we would likely be upgrading our system in the future. I got a reply from a reader who lives just a few hours away from us. They said that they would be getting rid of 9 235-watt solar panels, two Schneider charge controllers, and an adjustable pole mount and were wondering if we’d be interested in buying it.

After researching and running the numbers, we decided to check it out. Long story short: their equipment was a good fit for us and in great shape, so we bought it all! It was fun getting to make some new off-grid friends in the process too. The adventure of driving three hours south to meet perfect strangers about some solar panels is one I’ll not soon forget!

Related: How to Get the Best Recycled or Reclaimed Building Materials

Why We Built a Separate Solar Shed

Up to this point, we’d had all of our solar components in the mudroom at the front of our house. This solution was okay, but we decided to build a dedicated shed for our solar equipment. Why?

You can learn more about how we built the shed itself in this post.

How We Completed the Upgrade

Once we had the cordwood shed completely built and the mortar had cured, we started the process of moving everything over from the house to the shed. Obviously, each step has numerous sub-steps and could get super detailed, but the basic process looked like this.

Before we could move all of our existing solar equipment to the shed, a few things needed to be in place. First, we mounted the nine new solar panels so they could be ready to hook up the moment everything else could be put in place.

We also built a wall frame to hold our inverter and charge controllers level and steady. This was an important step for making sure we could secure our equipment with our cordwood walls.

We also ran the wiring from the shed to the breaker box in the house during this time. This involved pulling a bundle of wires through the conduit that runs from the shed, under the ground, up the side of the house, into the attic space of our mudroom, and down into the breaker box. Pulling this wire was a bit of a pain due to the number of bends in the conduit AND the fact that we could have used bigger conduit. I’ll tell you more about why this is important in the Lessons Learned section.

Either way, having the space and the wire ready to go was vital for the next step.

2. Disconnect all of the equipment from inside the house and cut power to everything for the day. 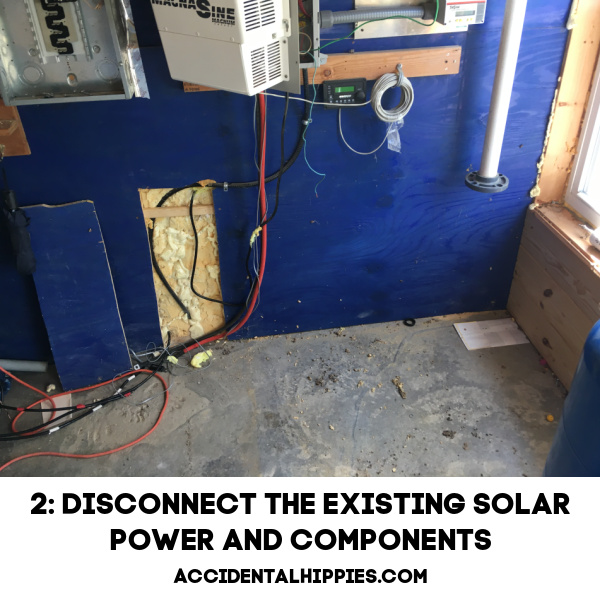 It was game on from this point forward. If we wanted to have power to the house by sundown, we had to start early and push to get everything moved and wired up. It might sound as easy as simply moving it from Point A to Point B and hooking everything up, but in reality, it isn’t so simple. This was a dawn to dusk project.

3. Move the inverter and charge controller to the shed. Mount everything to the wall. 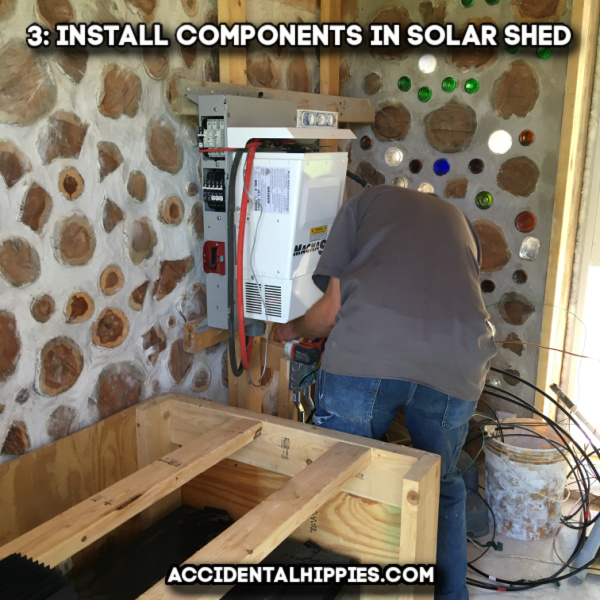 Again, this sounds simple, but these components are often quite heavy and/or awkward. Having multiple hands to help is ideal, and anyone helping should be able to lift well over 50 pounds. Communication and listening are also critical, as one slip could have sent an expensive piece of gear crashing to the ground. Luckily, none of that came to pass. It was hard, but we got it all fastened in place!

4. Move the batteries and the battery box to the shed. 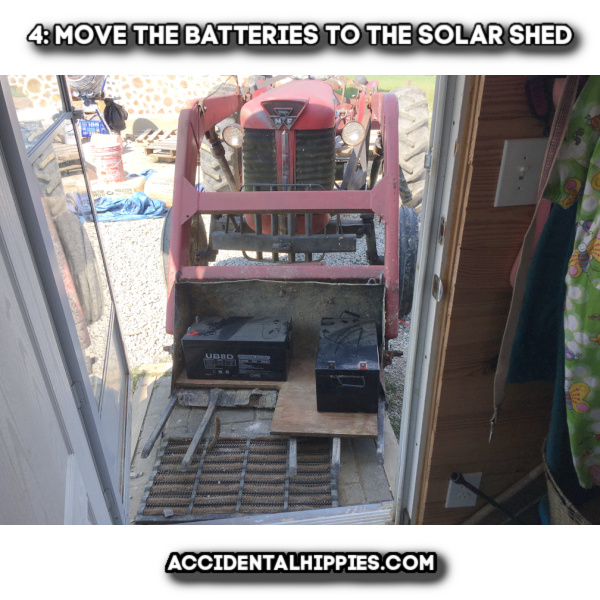 Our UB8D batteries weigh nearly 160 pounds each, and we have four of them. I personally cannot lift them. My husband, Mark, can lift them but they are at his upper limit. So we used our tractor to help relocate our original batteries to the shed. We ended up getting brand new batteries a few months later because it was clear the old ones wouldn’t reliably hold a charge through the winter. In both cases, having safe ways to move the batteries was a must.

5. Rewire everything (easier said than done).

Larger gauge wire is often difficult to bend and manipulate. Reaching wires through awkward spaces can be frustrating. Running out of “knockouts” in a breaker box is problematic. Even with lots of preplanning, there are so many ways for this part of the project to push your nerves to the limit. Fortunately, we managed (through lots of grunting and cursing) to get everything wired up and functional by nightfall.

6. Relocate the 6 old solar panels to the new solar pole in front of the shed. 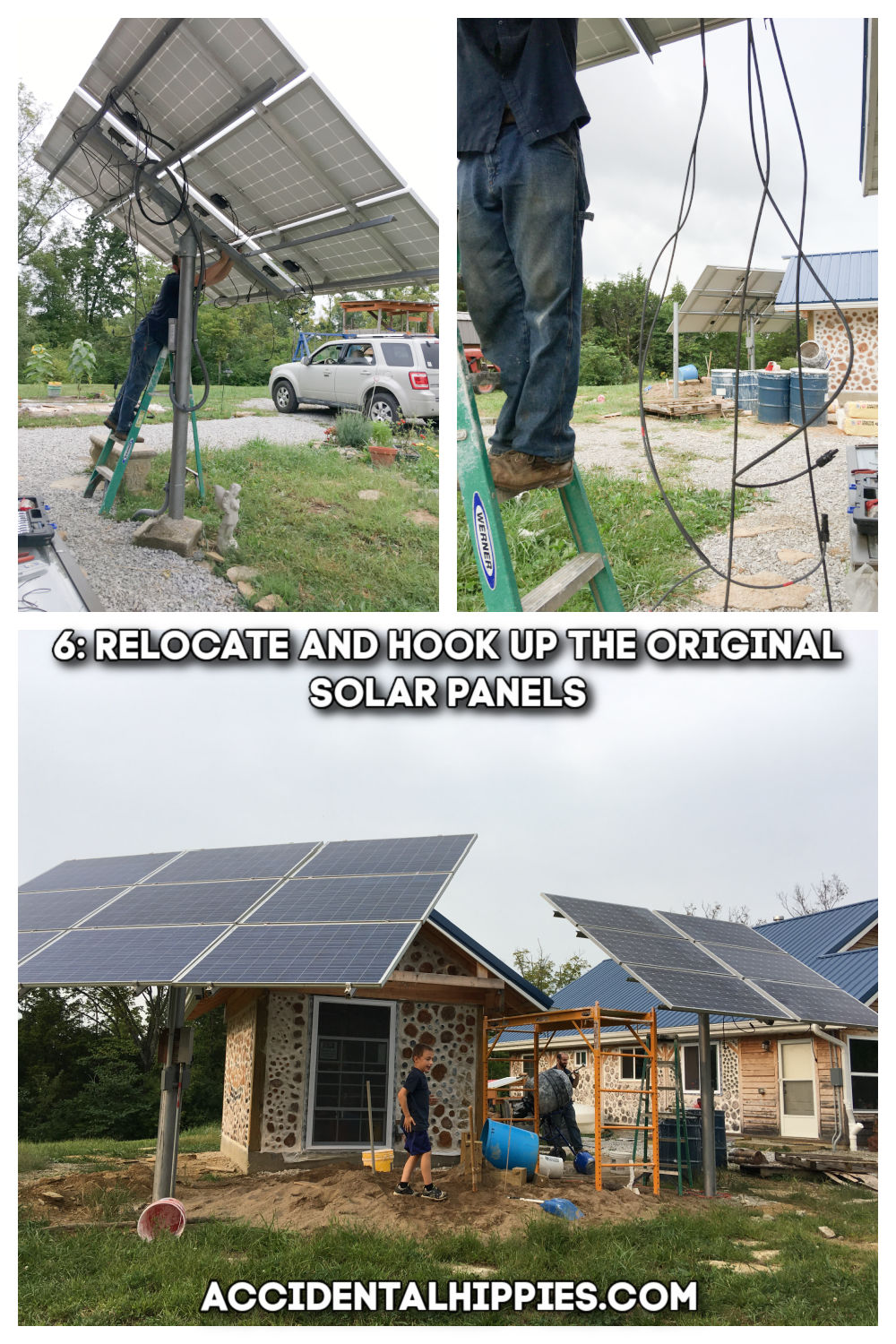 Moving these panels was an entire day’s worth of work on its own, so getting the other nine online first gave us power and lets us rest a bit between big jobs. First, we removed the panels, then disassembled and moved the mounting rails and brackets. We reassembled everything in order over on the new pole. We later pulled the old pole out of the ground with the tractor.

7. Get our work inspected and approved.

Our building itself didn’t require a permit, but our electrical work did. I had mentioned that my husband, Mark, took classes and received NABCEP solar installer certification. Why did he do that?

Our inspector managed to find a small bit of the National Electrical Code about “qualified installers” and determined that a certified installer needed to install the system. The NEC requires that “qualified” individuals install solar panels, but it doesn’t actually say what makes someone “qualified”, which usually results in differing opinions among code officials. You can find out more about that in this helpful PDF guide from Clean Energy States Alliance.

We honored our inspectors interpretation and worked to comply in the best way we could; the solution worked for everyone! There are a lot of mixed feelings about inspectors out there, so I encourage you to dig into that process here:

Natural Homebuilding and the Code

Why we pursued NABCEP certification

Knowing what we knew from the first system install and the extra we had to pay for it to be compliant, it was cheaper AND more viable for Mark to take solar installer courses through Heatspring and sit the exams to become a certified installer than it was to pay someone to do it for us.

Not only that but there are not many installers in most areas willing to take on a small off-grid job like ours. Most solar installers are doing grid-tied residential work OR large industrial installations. We even live in an area with multiple solar companies, but most wouldn’t give us the time of day. We were lucky we could even connect with someone the first time around.

So getting certified not only satisfied our inspector, it gives us crucial independence in the face of few technicians even willing to look at a system our size. It means that, if something goes wrong or we want to change/expand in the future, we have the knowledge and ability to make it happen.

No project ever goes exactly as planned. There were times where we couldn’t get wires to move the right way or go where we needed them to. We had to get creative on the fly. We thought our project was sunk for a moment, but we made it through.

Our key takeaways were these:

There’s so much to learn (and even more yet to write about it). You can continue your journey by checking out some of the posts below! Also, be sure to subscribe below to get our free Beginner’s Guide to Going Solar in our Member’s Only Resource Library.

Read these posts to learn more:

Learn more about our original cordwood homestead project here. And be sure to join us on Pinterest, Facebook, and Instagram for more homesteading goodies that don’t necessarily make it to the blog. Thanks for reading!

Previous Post: « How to Get Started With Solar Power for Your Home
Next Post: What Size Berkey Water Filter Do You Need? »