This post is a continuation of some of our biggest cordwood FAQs. The first section was about some of the basics of cordwood and how it is constructed. This section is entirely about how well cordwood walls perform in different situations.

How does cordwood handle the cold? The heat? Pests? Rot? FIRE???? We’ll explore those topics here! 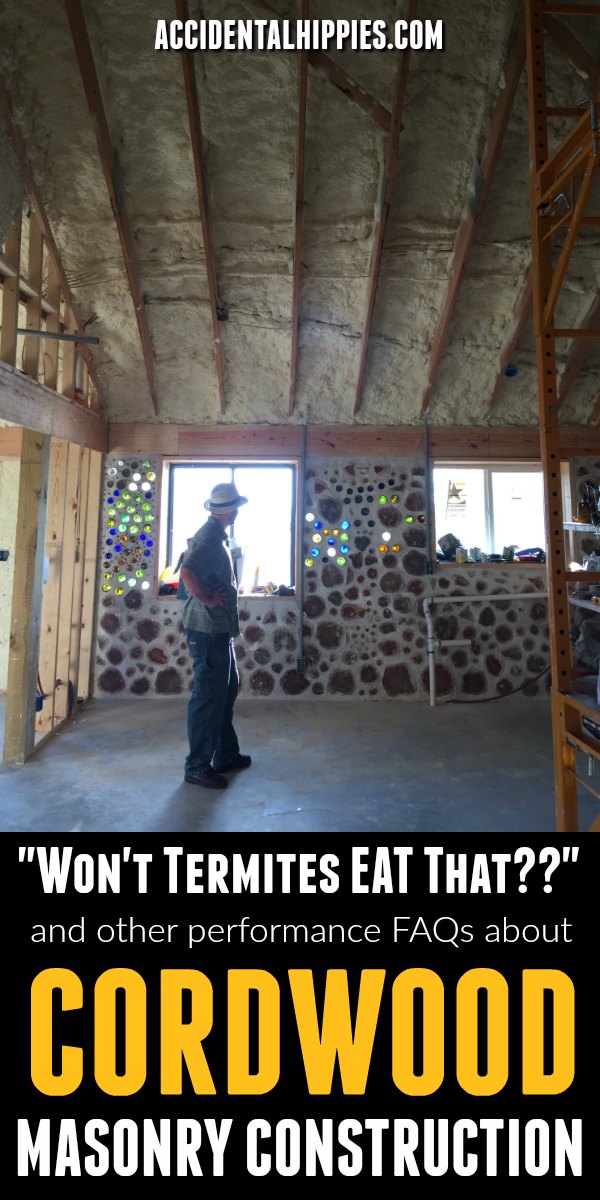 They aren’t drafty at all if you build properly and with an insulated cavity in the middle. I was worried about the same things before I started building, but as I actually built these walls with my own hands it became obvious why it was silly to worry. 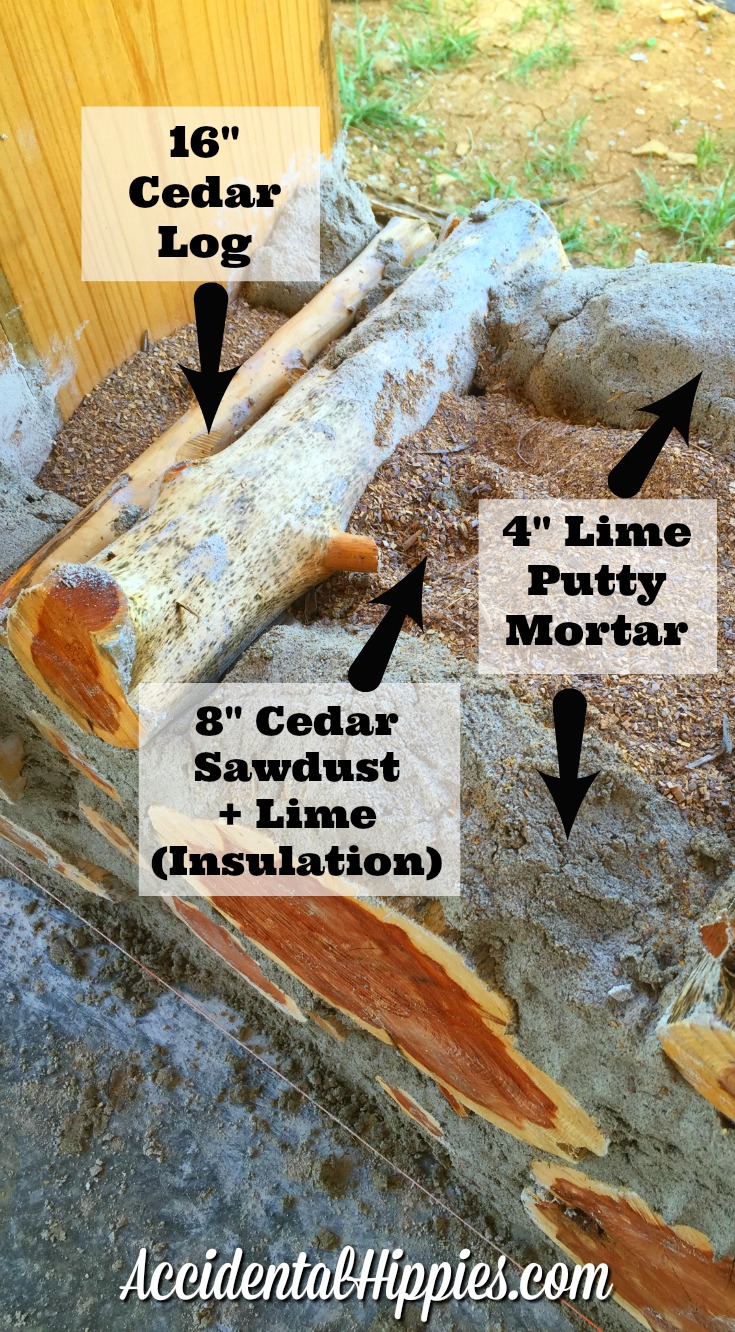 If there was no insulation then yes, there would likely be a good amount of air leaking through the gaps of the logs. This would be even truer if the logs hadn’t been properly dried and given time to shrink first.

2. I bet it’s cold in the winter though, right? 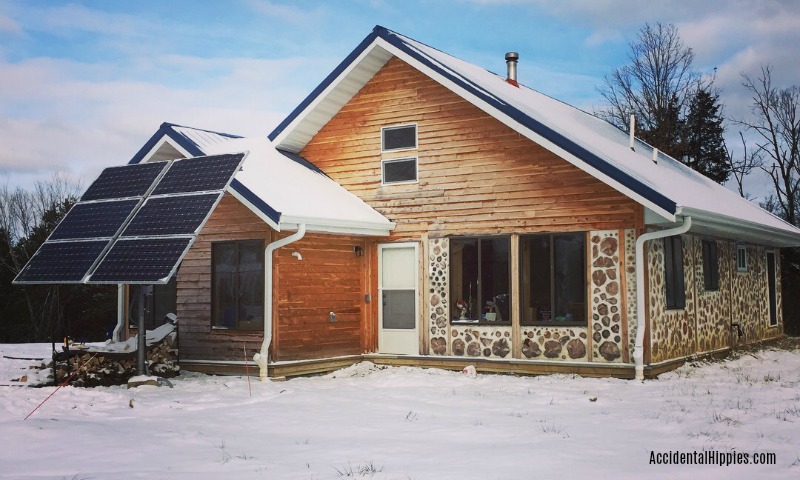 Not really. It does take longer to heat the walls and our slab foundation because of its immense thermal mass. BUT once they reach an optimal temperature they hold that heat much longer than a stud wall will.

For example, there was definitely a day last winter where we accidentally blew a fuse in one of our radiant heat thermostats and couldn’t turn the system on. Temperatures were in the mid-teens, and in the two hours it took us to go to the hardware store the temperature inside the house stayed in the upper 60’s.

Between the thermal mass and our passive solar design features it stays pretty cozy. You can read all about the performance of our cordwood house in the winter here.

Regular log cabins don’t have the same insulation or thermal mass that cordwood construction does, so it behaves entirely differently.

In the summer the same thermal mass effect that kept us warm in the winter helps keep the house cool on summer days. The cool of the walls from the nighttime slowly releases during the day. Sure, we still turn on our fair share of fans on those 90-100 degree days but compared to every stud framed house we’ve ever had our cordwood house stays cooler on its own.

For example, the high temperature on the day of this writing is 95 degrees Fahrenheit with a humidity of 80% (according to our thermometer) and the house is around 77-80 degrees inside.

Not if you take the time to build with best practices. A basic place to start is to make sure you:

There’s a LOT more to it than that. Read the full post on preventing rot in cordwood walls here.

For even more full details on cordwood building grab a copy of Richard Flatau’s “Cordwood Construction Best Practices”. You’ll be glad you did.

5. But I probably can’t build with that because I’m in the deep south/Pacific Northwest/an actual rainforest, right? Isn’t it too humid?

False! Again, cordwood is adaptable to a variety of climates, especially if you build according to best practices. There are some gorgeous examples of cordwood in humid places. For example, there are several homes down in Georgia, the Carolinas, and even Florida (not to mention the Florida building was built in 1931, so it’ll definitely last a long time). There is also an immense and beautiful cordwood school in Guatemala.

6. Aren’t termites going to eat that?

Not any more than they would eat a stud-framed home, honestly. There are many reasons for this. 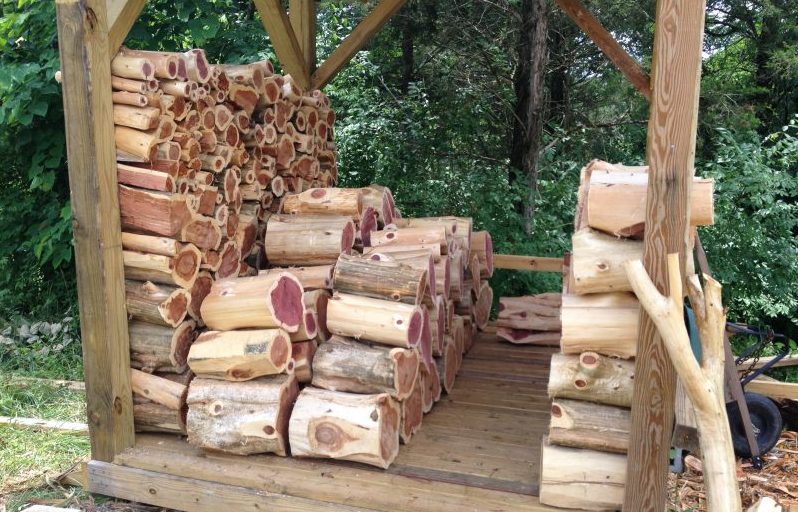 7. What about carpenter bees or other pests?

We have a ton of carpenter bees by our house, but they too are not a problem. They seem to be repelled by the cedar. I’ll watch them fly up and down the length of the house all afternoon as if they’re looking for a place to bore a hole, but they never find a suitable spot. I have seen them bore into nearby trees and scrap lumber but they stay away from our house.

Ultimately, ALL homeowners should be making observations and looking out for pests whether that home is made of cordwood or not. The lack of familiarity with cordwood is what drives those questions, but honestly, a properly constructed cordwood home won’t have any more issues with pests than any other kind of house.

8. I bet cordwood walls smell awesome with all that cedar! Is it overwhelming?

Surprisingly, no. Not at all. In fact, you can’t smell the cedar unless it’s right after a rain and you put your face immediately next to it. In our house, the stronger wood smell comes from our tongue and groove pine, but all wood smells are slowly dissipating. 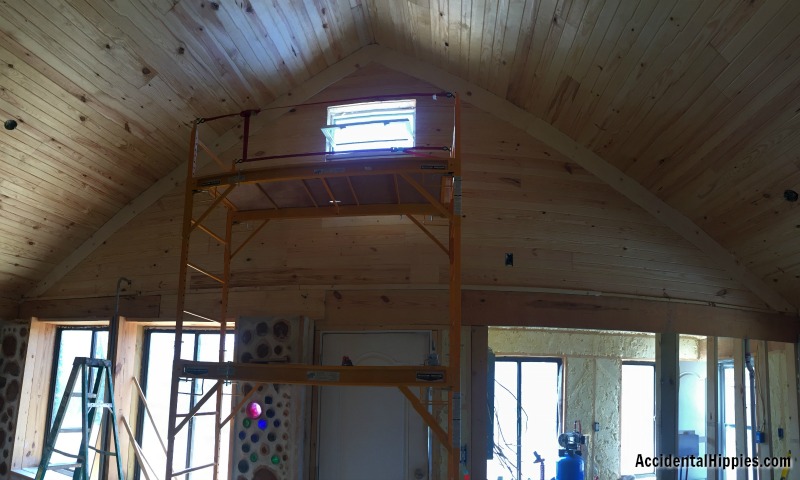 9. Look at all that wood though. It’s going to burn down SO fast, right??

One of these days I’m going to do a side-by-side test with a small cordwood wall versus a similarly sized mock-up of a stud wall complete with veneer and insulation. And I’m going to light them both on fire.

My hypothesis based on my experiences with cordwood masonry is that I would have to hold a flamethrower at a cordwood wall for a very long time to get it to light even a little bit. Think about it:

If you’ve ever built a fire before you have experience with number 2. You use kindling, small wood pieces, to get a fire going before a log will light. You don’t start by lighting a large log first. This is the same principle.

Not only that, but each log is separated from the next by a matrix of mortar. It would take a considerable amount of time for a fire to spread from log to log.

Basically, if we ever had a fire at our house the stud walls and tongue-and-groove would be the first to go. The cordwood would likely remain.

“Well, that’s speculation. Has it ever happened?”

To reference this post from Daycreek, there is documentation of a fire in a cordwood home that resulted from an exploding propane freezer. It took 2 entire days for the house to burn down and the insurance company reduced its rates on cordwood homes as a result. This makes sense, given the experiences I had getting homeowners insurance (and enjoying the much lower rates I’m paying for a “masonry” home compared to our little midcentury ranch).

And to reference this page from Richard Flatau, the University of New Brunswick held a constant fire at a cordwood wall for five hours and only managed to char the ends of the logs.

Get our free eBook detailing everything that went into building our cordwood house here: