If you’re like most people, you probably have debt. Maybe you have a LOT of it. Whatever the reason, you’re probably here because you realized that it’s killing you. In this post, I’ll go into great detail about how we paid off a whopping $24,000 in less than a year and give you the tools to succeed on the path to financial freedom.

A few short years ago, we were a pretty typical couple.  We owned a house, had two student loans, a car loan, a credit card, and a few financed things like our furnace and some instruments.  Outwardly, things probably looked pretty decent, and may even be pretty similar to what many of you have right now.

We also had some decent jobs but nothing high earning.  I teach music part time in a Catholic high school, and Mark is also a music teacher who gigs on the side.  You know, that whole advice about “pick a career you love and you’ll never work a day in your life”.  We may have taken it too literally.

We married as young, broke college kids.  We made poor choices (pro-tip: your credit card should not double as an emergency fund).

At its height, our student loan debt was around $27,000 and we had a revolving door on our credit cards that usually hung out in the $3000 range.  We had other lines of credit too for things like instruments ($4000 tax write-offs lol) and and our heating/air unit ($4500).

So if you’re following the math, our grand total of debt maxed out around $38,500.

Around the spring of 2012, I acquired my mom’s Dave Ramsey Financial Peace University CD’s.  I will freely admit that I let them sit there for months before I actually thought about playing them.  What could I possibly learn from self-help crap, right?

During summer break that year I decided to let the CD’s autoplay while I did some household chores, and what I learned slowly started changing my thinking.  I made Mark start listening to them with me, and from there we were inspired to get rid of our debt once and for all.  Dave frequently uses the phrase “change your family tree”.  We knew that we wanted to have kids, and we knew that we didn’t want to teach them the poor financial habits we were then practicing.  We knew we had to make a change.

At this point, we had about $24,000 of our original total left.  The furnace was paid off on schedule.  The student loans were slowly being whittled away.  We’d been working at it for YEARS but still had this behemoth over our heads and were determined to make it leave for good.

How To Pay Off Your Debt

We followed the Dave Ramsey Baby Steps.  We had frequent meetings to make sure we were on track to meeting our goals, and we kept a chart of our debts on the fridge.  When we nixed a debt, we’d cross it out together, high five, and then toss back a shot of bourbon for good measure (it can’t be all drudgery, right?).

This was an easy one for us because we had it already.  If you don’t, scrape it together however you are able and then keep it in an account specifically earmarked for emergencies only.

The concept is simple: Pay off your smallest debt first, then apply what you were paying on that debt to the next smallest debt.  Rinse and repeat until the debt is gone. Check out this free worksheet we used to pay it all off! 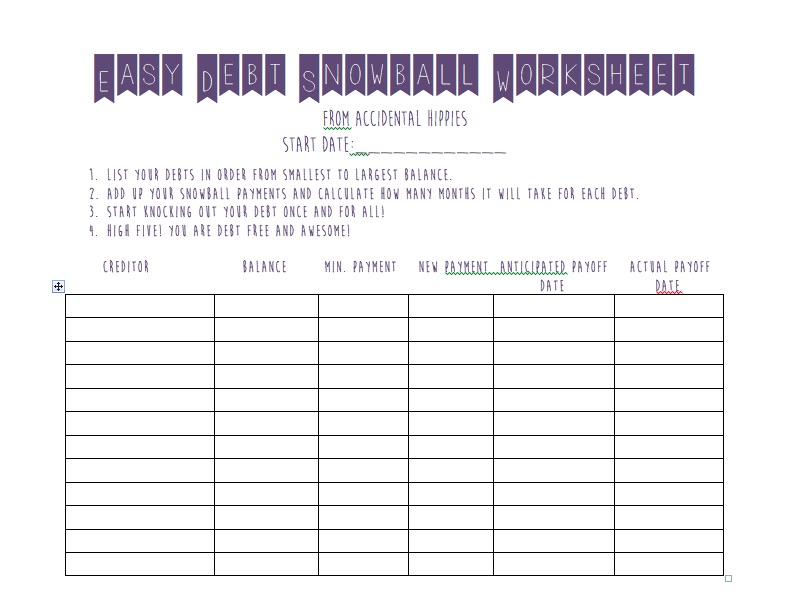 By the time we started our snowball, I had negotiated a full time position at school, so our household income grew to be about $55,000.  Still, not swimming in cash, but compared to the previous years I felt like Scrooge McDuck swimming in my money piles.  Copied straight from my old Excel file, we had the following:

Per the snowball, we finished the credit card and  took the several hundred we threw at the credit card each month and added it to the vibraphone loan, which took the payment from $333 to about $600, paying it off about twice as fast.  Once that was finished, we took that $600 and added it to the $140, which meant we were paying $740 on the student loan, then finally $920 on the last one.

Those are just the generic monthly payment totals though.  What numbers are missing are the random, extra huge payments Mark would make any time he got paid for a big gig, marching band, indoor drumline, etc.  He was a rockstar at taking those larger sums and just slamming them down on the debt.  I’m the budget nerd and I love me some spreadsheets, but he’s the one who really gets it done! We kept track of everything using this spreadsheet template.

We were also blessed to be able to use part of the money left to me after my grandmother passed away to pay off the remaining $2400 or so of my student loan around May 2013, and to use the rest to completely set up our full emergency fund.  If not for that, we would not have completed the snowball until several months later and would likely still be using the money we were saving from payments to set up the emergency fund.

Did I mention that I also saved all of my private lesson money to pay cash ($6000) for a car during this time too?  Because mine was dying.

If you do the math on our income minus the debt and the car, you’ll see that our household expenses were only around $25,000.  We still had cell phones, health insurance (individually purchased, mind you), good food, and everything else we felt we needed.  How so frugal, you may ask?  Check out how we live on HALF OF OUR INCOME in this post.

We started in July of 2012 and made the last student loan payment May 2013.  We were blessed to be able to bring our son into a debt-free home later that summer.

After that, the rest of the baby steps help you to establish good financial habits to ensure that you can support your family and never repeat the cycle of debt that got you into that mess in the first place.  The emergency fund is the biggest help you will have to avoiding emergencies.  Think about it:  when you only have a few hundred dollars in the bank to pay the bills, every unexpected expense is an emergency.  A car breaking down can be catastrophic and cause unreasonable amounts of stress.  But when you have 3-6 months of living expenses just in case, you can simply pay for the real emergencies rather than go into debt to take care of things.

The remaining baby steps are:

4. INVEST 15% OF HOUSEHOLD INCOME IN ROTH-IRA AND PRE-TAX RETIREMENT

7. BUILD WEALTH AND GIVE!

To any of you who are in a dark financial place looking for a way out, I truly hope that you can find what you need to change your stars.  We are average people just like many of you who have made incredible money mistakes, but we are on a better path to true financial freedom.   I dream of a day when we can live, save, and give “like no one else”.  I believe that our frugality will help propel us to that point.

If you’re convinced that it is possible to change your financial future, I highly recommend continuing on to this post on exactly HOW to use the debt snowball to get debt free (including free tools to get you going!): 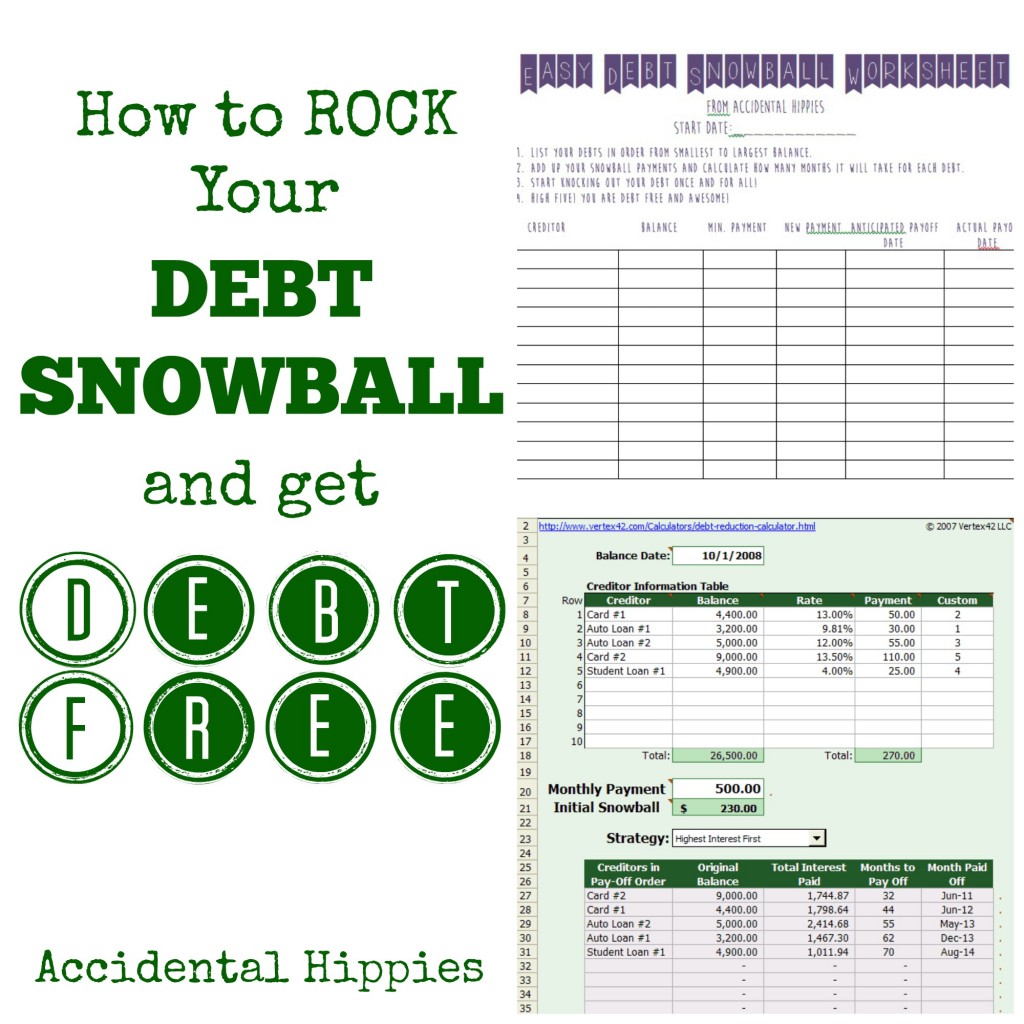 I also recommend downloading this free 3 page goal-setting and easy budget worksheet to help set a plan in motion!

And for further insight, you can also check out how we live on half our income and learn about the three things we do as a couple to win with money:

If you have any questions about how we did it, how you can do it, or if you want to share your debt-free story, leave a comment below, or connect with us on Facebook and Twitter @AcciHippies! 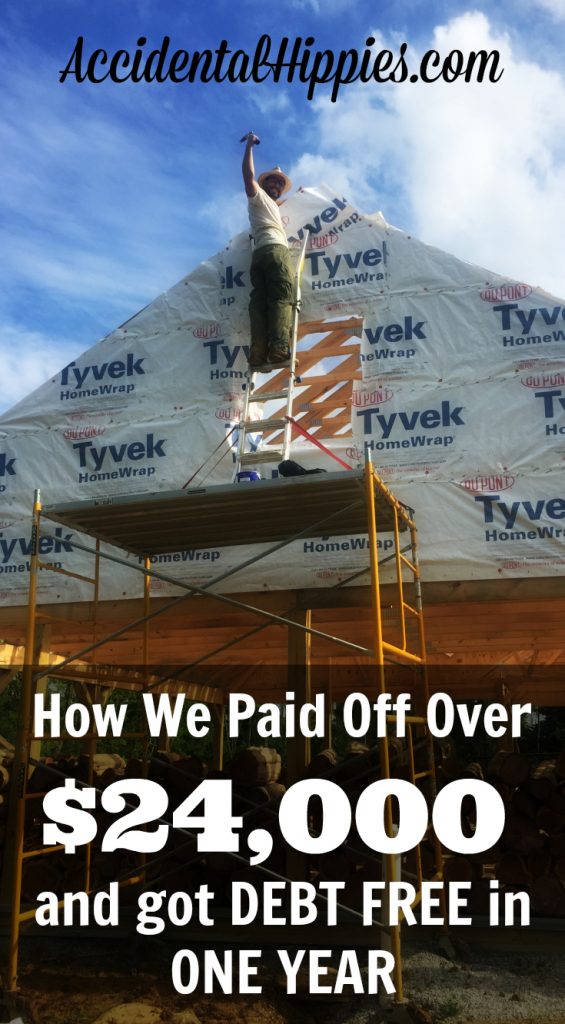 Previous Post: « 4 Things We Learned From Paying Off Our Debt (and what we want to do next!)
Next Post: Easy Cloth Diaper Changing Station »